The Green Sheaf by far had the largest correspondence with Ellen Terry and Edith Craig. While majority of these letters are personal in nature, it is important to remember the intimate relationship she had with several of the members of the contributors to the periodical. For example, Ellen Terry was like a surrogate mother to Pamela Colmen Smith, who created The Greensheaf publication. In her letters to Terry and Craig, she uses pet names like “Gandy” in reference to Terry (EC-AZ3,037; EC-Z3,149). Additionally, there is Correspondence with Christopher St. John, who was in a ménage à trois with Craig and Clara Atwood. In many of St. John’s letter’s to Terry are reports of Holiday’s with Craig, updates on illnesses, enclosed photographs, and even gardening instructions. 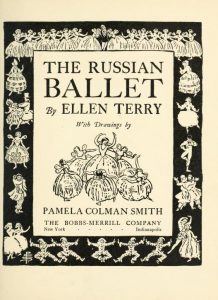 Both of these individuals not only had a very strong personal relationship with Terry, but were colleagues on a number of projects as well. In Smith’s letters is reference to The Russian Ballet which was a joint project between the two as well as drawings that Smith had created of Terry in a variety of theatrical roles, attached with a price list (x; EC-Z3,149). On the other hand, St. John also worked with Terry on a number of literary works, the most significant of which were Terry’s Shakespeare lectures. In their correspondence to Terry, St. John makes numerous references to editing and revising the lectures, finances regarding the lectures, as well as advice on when to publish them (ET-Z1, 436; ET-Z1,425; ET-Z1, 429). In fact, in her article on Terry’s career in public speaking in the after math of her theatrical career, Katherine Kelley illustrates how fundamental St. John was to the project by claiming that they assisted in creating a sort of “high priestess” persona in which the lectures would be delivered to suffragist audiences around the globe (68). This persona was built upon Terry’s years of dominating the London Theatrical scene as well as Craig and St. John’s influence as suffragist’s, the cause of which Terry never seemed fully committed to (Kelley 75). St. John served as the final editor for the Four Lectures on Shakespeare, which was an important cultural and literary aspect of the suffragist movement (Kelley 67).

Of course, one of the most biologically intimate and simultaneously complex personal and professional relationships with a contributor of The Greensheaf is that of her son, Edward Gordon Craig. Their relationship did not even pale in comparison to that between Terry and Edith Craig. In Michael Walton’s essay on the “relationship”, although one barely existed, between Edward Gordon Craig and his father, Edward William Godwin, he notes that “when Godwin and Terry split up she offered she offered him Ted [Edward Godron Craig] as long as she could keep Edy [Edith Craig]. He too thought Edy was the better part of the bargain” (83). Evidently, Craig ended up with both children, but it seems that this unstable relationship was something that would plague their future relationship together. From an early stage in his life, Edward Gordon Craig was critical of his mother’s commitment to her career and felt that she should have been there more for him as a child (Walton 83). When he became older, Edward Gordon Craig more accustomed to working alone and eventually “exiled” himself to Europe, clearly far away from his mother and sister (Holroyd 78- 79). After her death he published Ellen Terry and her Secret Self in which he alluded to the idea that Terry had two entirely personalities and stated: “No one is less suited than a busy actress to cope with her children properly” (Walton 83). In her many letters to her son, despite the fact that he had moved so far, it is clear that she attempted to parent from a distance and would provide guidance or fulfill his many requests for financial assistance that he had sent to her (Holroyd). In fact, much of his personal correspondence seems to be updates and illustrated images on his travels around Europe, followed by requests for more money for either business or personal reasons (ET-Z4, 111, ET-Z4,141; ET-Z4,099).

It also seems that Edward Gordon Craig wrote to his mother about issues that he was having with members of both the theatrical community as well as the literary community. In on letter, he mentions that he is optimistic about winning his legal case against Herbert Beerbohm Tree, a prominent figure of London’s theater scene in the late 19th and early 20th century (ET-Z4,132). Additionally, in another letter he accuses Charles Ricketts, contributor to The Pagent, of stealing his ideas, again, before asking his mother for some articles of clothing (ET-Z4,145). On his essay on “Ted’s” character, Holroyd describes him as a “pretentious, stimulating, tedious, charming, and oppressive character” and it seems that these characteristics produced themselves in his interactions with those surrounding him (80). Regardless, he was an important cultural figure of the Fin de siècle period and made important contributions to contemporary visual art.

Other correspondence includes letters to Terry from Laurence Irving, requesting her and his father, Henry Irving, to play the leads in his play Godefroi and Yolande, and personal notes discussing each other lives outside the worlds of theater and literature (ET-Z1,238; ET-Z1,236). Martin Shaw is another character that seems to have been involved in the theater community as he writes to Terry outlining the costs of Orchestra members needed, presumably for a production (ET-Z1,451). The remainder of the letters are that of condolences addressed to Edith Craig on the death of Ellen Terry. 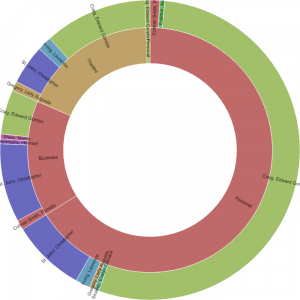