Ellen Terry and the periodical community in 19th century London 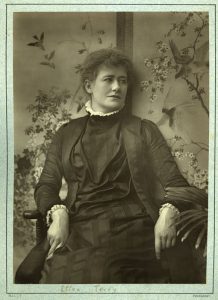 The term fin de siècle is used to describe the end of a century. It is most commonly used in association with the ending of the 19th century in Europe where a climate of aestheticism, sophistication, and decadence existed (Encyclopædia Britannica). At the centre of the fin-de-siecle artistic avant garde community in London was Ellen Terry, arguably one of the most successful Shakespeare actresses of the nineteenth century. Surrounding her was a collection of some of the most influential artists, political figures, writers, activists, and designers of this time period.

This project aims to track and visualize the connections between the theatrical community and the periodical community in order to demonstrate the intermedial world between performance and print. Terry and her daughter, Edith Craig, were in communication with contributors from several publications of the Yellow Nineties 2.0 project including The Green Sheaf, The Yellow Book, The Savoy, The Evergreen, The Dial, and The Pageant. As an Actress, activist, socialite, and mentor, her career lasted almost seven decades, and during that time she worked on a number of collaborative projects with contributors like Pamela Colman Smith, Laurence Housman, and Arthur Symons. Her networks took her across the world, and into many social arenas, in both theatrical tours with the Lyceum theatre and in her own Shakespeare lectures, which she conducted in London, America, Australia, and Canada.

This project was created by Marion Grant.

Correspondence Analysis – An analysis of the letters exchanged between Ellen Terry, her daughter Edith Craig, and the contributors of the Yellow Nineties periodicals

Correspondence Map – The physical location of contributors in relation to Ellen Terry, Edith Craig, and other important establishments related to the Yellow Nineties Project

Visualization Gallery– A gallery of all the data visualizations from each periodical, available for side by side comparison

Works Cited– A list of references used for this project