It is within the correspondence between Ellen Terry, Edith Craig, and the contributors of the Savoy that demonstrate a strong connection between the theatrical and literary worlds in Victorian London in the 1890’s.

All of the contributors who wrote to Craig and Terry, with the exception of George Bernard Shaw, Max Beerbohm, and Joseph Pennell, discuss productions, costumes, play-writing, and even the Masquers committee. For example, Arthur Symons wrote to Craig concerning the Masquers, specifically on the topic about committee members and evading censorship issues for a special presentation that was to be preformed for the Masquers by actor Eleanora Duse. Additionally, William Rothenstein wrote with notes and critiques from both himself and his wife on some costumes that Craig had produced (EC-Z3,576; EC-Z3,575).  George Moore discusses with Craig attending rehearsals and copyright laws on plays in French (ET-Z1,328, ET-Z1,329, ET-Z1,330). In addition, it seems that Mabel Dearmer had followed up on the costumes that Laurence Housman sent to Craig with a note that Dearmer had interest in them (EC-Z3,180; EC-Z3,181). Additionally, she writes to Craig to thank her and Terry for their efforts towards opening the Children’s Theatre Season at the Royal Court Theatre (EC-Z3,182).

A letter from contributor Ford Madox Hueffer demonstrates the vital intersection between Suffragist and theatrical efforts that proved crucial to Craig’s work. She, along with a generation of of feminist playwrights like Cicely Hamilton, Elizabeth Baker, and Elizabeth Robins, utilized the theatrical stage to fight for social justice for women (Kelley 70). It seems that Craig solicited Hueffer’s efforts to create a suffragist play. in his reply he claimed that his ideas were better suited to written materials like articles but would be more than willing to draft something for her is this is what she would prefer (EC-Z3,364).

Although both Max Beerbohm and George Bernard Shaw’s correspondence to both Craig and Terry is more personal in nature, both come from backgrounds deeply embedded in theatre. For example, Beerbohm hails from a family very much involved in theatre. In fact, one of his relatives, Herbert Beerbohm Tree, English actor and theatre manager was actually a colleague of Ellen Terry. Conversely, George Bernard Shaw worked as a playwright in London and was also a colleague of Ellen Terry’s.

While Joseph Pennell does not have a background in theatre, it seems that he lived in extremely close proximity to Edith Craig, as demonstrated on the Correspondence Map, and wrote to her twice in regards to the extremely loud megaphone use on the roof, which he claims was sanctioned by her and demanded an apology (EC-Z3,507; EC-Z3,508). 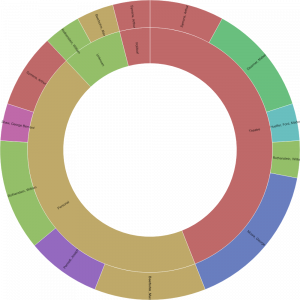