Through their correspondence with The Yellow Book contributors, Ellen Terry and Edith Craig demonstrate the unique and complex types of working relationships that they both had with members of the literary community in the late 19th and early 20th century. The sheer number of contributors from The Yellow Book involved with Terry and Craig in comparison to other publications, like The Dial, could be one of the reasons for such a vast array of types of relationships. On the spectrum of relationship type is solely work-focused, such as Walter Crane or W. B. Yeats, and on the other end more personal, intimate relationships. Somewhere between the two sides of the spectrum, with a balance of personal and professional, are people like Pearl Craigie.

To begin, Walter Crane and W. B. Yeats almost exclusively discuss topics of theatre and business. Both were members of the Masquers committee along with Craig. Both contributors make reference to Dr. Gilbert Murray, who was invited to join the Masquers but soon became a point of contention between the group. When Yeats initially asked Murray to join the goal was to form “a new sort of stage society” (Schuchard 123). Murray had initially rejected the offer, and also seemly felt anxious at the amount of power Edith Craig possessed as a producer for the plays that he had translated. He wrote in a letter to a colleague; “As you know, I have rather shirked the notion of having it done, especially by the Masquers, because I felt that I should have no control when once Miss Craig’s poodle [Martin Shaw] got the bit between his teeth, and I did not know what might happen” (Schuchard 142). Evidently, Murray wanted the committee to dissolve and the on-going dissension between the group was a topic of a few letters from both Crane and Yeats to Craig (EC-Z3,794; EC-Z3,171). Rarely did either party venture outside the realm of professional, and when Yeats did it was to compliment the work of Terry’s son, Edward Gordon Craig, in an unnamed play (EC-Z3,785).

Then of course are contributors like Pearl Craigie, who seems to exist within both a professional and personal capacity to Terry. Throughout her trail of correspondence she sends constant ideas and sketches for theatrical pieces for Terry to star in. She also make recommendations as to the logistics of rehearsals with suggestions like authors not being present for the last few rehearsals (ET-Z1,115). Additionally, she also implores Terry to consider not taking part in Henry Irving’s son and Greensheaf Contributor, Laurence Irving’s production of Godefroi and Yolande, the two leads of which he had envisioned Terry and his father (ET-Z1,119). As well as functioning so actively in Terry’s theatrical life, its clear from the letters that Craigie shares an intimate friendship with both Terry and Craig. In letters addresses to Terry, Craigie refers to her as “Edie” and sends updates as to her travels. Additionally, Craigie twice expresses some concern as to Christopher St. John character, fearing that they will expose some illicit information and claiming that they are acting unethically (ET-Z1,135). Considering the intimate nature of the relationship between Craig and St. John, Craigie must have felt close enough to Terry to express such concerns. 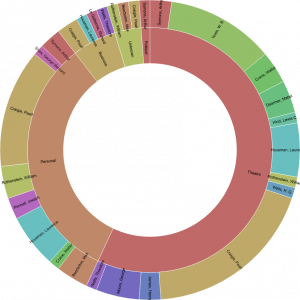